I’ll be appearing on Mick Kern’s show on NHL Network Radio, on Sirius XM, on Friday, October. 13th, at 11:15 a.m. EST. Pretty sure my co-author Greg Oliver will be sitting in studio with Mick and I, no doubt telling what a joy I was to work with!

On Sunday October 1st Gilles Gratton will be on WLIE 540 AM Sportstalkny talking about his new book, at 7 p.m. EST. www.sportstalknyradio.com 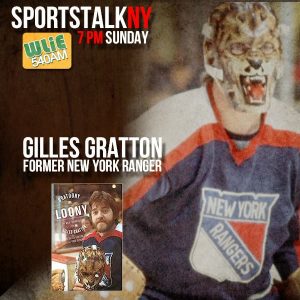 Mark your calendars: the book launch for Gratoony the Loony, with Gilles Gratton in attendance, will be at The Sport Gallery in Toronto’s Distillery District on Thursday, October 12, at 7:00 p.m. The other ECW Press hockey books this season, including one by Dennis Maruk (with Ken Reid) and a Leafs book by Lance Hornby will be launched too. Hope to see you there!

There’s a first time for everything, and the first review of my book appeared on the blog, “The Guy Who Reviews Sports Books.” And the strange thing is he liked it, rating it 5/5!

This excerpt was nice to read: “The writing is very good for a sports memoir, something that is typical for Oliver. His contribution to the book can be found throughout the memoir and is the perfect fit for Gratton’s carefree discussion of his hockey career, his escape to practice transcendental meditation and his relationship with his parents, wives and children. This book was as fun to read as it was to watch Gratton play during his career. Fans of the sport during the 1970’s will want to add this one to their libraries.”

Here’s where to read the whole review:
http://sportsbookguy.blogspot.ca/2017/08/review-of-gratoony-loony.html

There are also some reviews appearing on the Goodreads.com website.

Link Goodreads.com to the page:
https://www.goodreads.com/book/show/34014623-gratoony-the-loony

I didn’t know this until I worked on Gratoony the Loony, but the publisher wanted us to go out and get notable people to read the book ahead of time and offer up a “blurb” for the back of the book. Here are three that we chose:

“An almost impossible to believe life story, with an anti-hero cast that not even Slap Shot would dare to imagine. In the history of hockey, you’ll never meet Gilles Gratton’s equal. You’ll read Gratoony the Loony in one gulp, mouth wide open. All that we’ve ever heard about him, all the legends, and all the mind-blowing and hilarious tales, are true.”
– Marc Durand, author and reporter for CBC/Radio-Canada

“Hockey has had its fair share of memorable characters, but none more so than Gilles Gratton. Now for the first time, the eccentric and outspoken goaltender shares his own ‘unique’ story, and what an interesting tale it is. From his childhood in Quebec, to his junior days in Oshawa, and his short, abbreviated stints in the WHA and the NHL, and beyond, it’s all here, no holds barred. Written alongside noted hockey author Greg Oliver, Gratoony the Loony takes the reader on a personal journey quite unlike any other.”
– Todd Denault, author of Jacques Plante and The Greatest Game

“NHL history is filled with legendary players doing legendary things. But sometimes, the very best stories are found by digging past the headlines and record books and into the game’s oddball cast of supporting characters. And the hockey world hasn’t produced many characters more fascinating than Gilles Gratton. From his memorable masks to his transcendental meditation to his naked practices, Gratoony the Loony has a fascinating story to tell, and hockey fans of all ages won’t want to miss it.”
– Sean McIndoe of Down Goes Brown